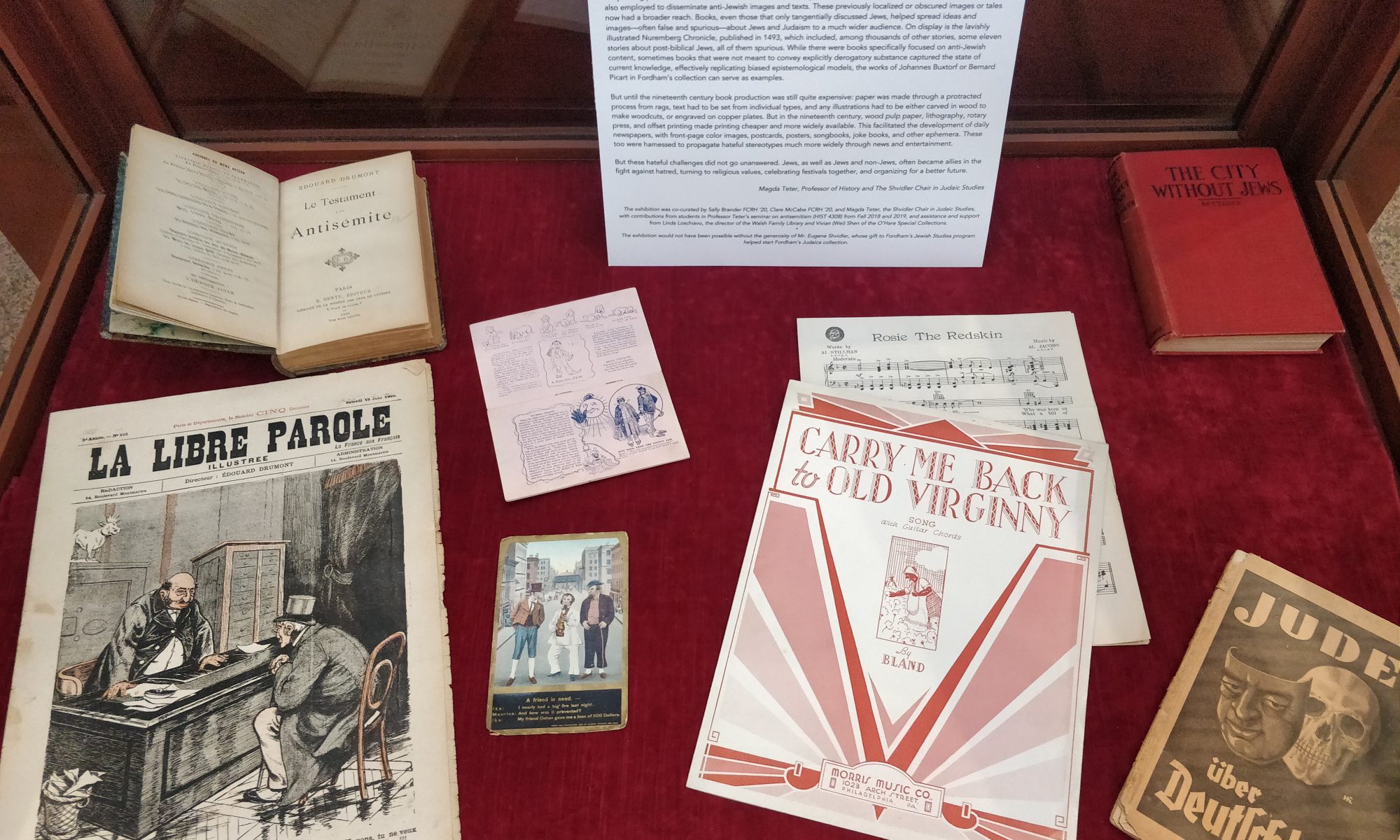 by Magda Teter, The Shvidler Chair in Judaic Studies

Technological advances can lead to positive social change. Technological innovations have helped create, preserve, and disseminate knowledge. In medieval Europe, the introduction of paper lowered the costs of manuscript production and record keeping. The invention of movable type and the printing press in the middle of the fifteenth century made books more easily accessible. The innovations in the production of paper in the nineteenth century, and in printing methods made newspapers, postcards, and color books possible. Photography, radio, and films facilitated new forms communication of news and entertainment. In our lives the Internet has provided new ways to communicate and learn. But along positive change, technological advances have often also been harnessed to less laudable goals, allowing for access to and dissemination of not only “useful” or “respectable” knowledge, but also of hateful stories, derogatory images and stereotypes.

In June 2019, the Council on Foreign Relations concluded that “Violence attributed to online hate speech has increased worldwide.” Twenty-first century media technology has been shown to facilitate dissemination of hate–bullying on social media; chat groups that allow for racist and antisemitic individuals to find like-minded communities; bots amplifying hateful messages. But while the media technology we live with is new, the phenomenon of harnessing new technology for hateful purposes is not. Anytime communications technology advanced, hatred spread as well. The exhibition explores how different technological breakthroughs facilitated the propagation of hate: in Europe—anti-Jewish and antisemitic images and tales, in America—antisemitism and racism.

Derogatory anti-Jewish iconography emerged at the end of the 12th century not to channel anti-Jewish sentiments but rather to amplify Christian piety. With time this anti-Jewish imagery gained more explicit hateful meaning. Still in the Middle Ages its reach was relatively limited— church art seen only locally, or precious manuscripts seen by few, such as here the splendidly illuminated Bible moralisée—the medieval picture bible—made for King Louis IX of France between 1226 and 1234, on display here.

The breakthrough came with the invention of the printing press in the middle of the fifteenth century, which resulted in the first mass produced commodity—the printed book. Along came also cheaper pamphlets and broadsides. While the printing press allowed for the diffusion of knowledge, laws, and devotional texts, the new technology was also employed to disseminate anti-Jewish images and texts. These previously localized, or obscure, images or tales now had a broader reach. Books, even those that only tangentially discussed Jews, helped spread ideas and images—often false and spurious—about Jews and Judaism to a much wider audience. On display is the lavishly illustrated Nuremberg Chronicle, published in 1493, which included, among thousands of other stories, some eleven stories about post-biblical Jews, all of them spurious and derogatory. While there were books specifically focused on anti-Jewish content, sometimes books not meant to convey explicitly derogatory ideas captured the state of current knowledge, effectively replicating biased epistemological models, the works of Johannes Buxtorf or Bernard Picart in Fordham’s collection can serve as examples.

But until the nineteenth century book production was still quite expensive: paper was made through a protracted process from rags, text had to be set from individual types, and any illustrations had to be either carved in wood to make woodcuts, or engraved on copper plates. But in the nineteenth century, wood pulp paper, lithography, rotary press, and offset printing made printing cheaper and more widely available. This facilitated the development of daily newspapers, with front-page color images, as well as postcards, posters, songbooks, joke books, and other ephemera. These too were harnessed to propagate hateful stereotypes much more widely through news and entertainment.

But these hateful challenges did not go unanswered. Jews, as well as non-Jews, often became allies in the fight against hatred, turning to religious values for moral support, celebrating festivals together, and organizing for a better future.

The exhibition “Media Technology and the Dissemination of Hate” is on view until May 31st, 2020 at the O’Hare Special Collections at the Walsh Family Library at Fordham University, Rose Hill Campus.

The exhibition was co-curated by Sally Brander FCRH ‘20, Clare McCabe FCRH ‘20, and Magda Teter, the Shvidler Chair in Judaic Studies, with contributions from students in Professor Teter’s seminar on antisemitism (HIST 4308) from Fall 2018 and 2019, and assistance and support from Linda Loschiavo, the Director of the Walsh Family Library and Vivian (Wei) Shen of the O’Hare Special Collections.

The exhibition would not have been possible without the generosity of Mr. Eugene Shvidler, whose gift to Fordham’s Jewish Studies program helped start Fordham’s Judaica collection.