As we endure the pandemic of COVID-19, the plagues from the story of Exodus and the Haggadah acquire a different meaning. The iconographic representation of the plagues can already be found in medieval illuminated Haggadot, like the 14th-century Spanish haggadot: Golden Haggadah and the “Brother Haggadah,” now at the British Library. Both begin with a sequence of magnificent illuminations depicting the story of Exodus.

The “Brother Haggadah” has depicts eight of the ten plagues, skipping the first (blood) and the last (the killing of the first born). Both the Golden Haggadah and the “Brother Haggadah” were were commissioned by affluent Spanish Jews. These are two of several surviving illuminated haggadot from Spain. Among the other known Spanish haggadot are the so-called Sarajevo haggadah and the Rylands haggadah from the the John Rylands Library in Manchester.

Christian illuminated bibles, especially the so called moralized bibles, also included illustrations of the plagues. Here is a late 14th century French bible, now at the Morgan Library, Histoire de la Bible et de l’Assomption de Notre-Dame, France, Paris, between 1390 and 1400 (MS M.526). Folios 12r-14v depict the scenes from Exodus relating the ten plagues. Here is the plague of locust. On top right Moses speaks with Pharaoh, depicted as a king, and at the bottom right Moses speaks to God, who is depicted as Christ.

The iconography found in many modern haggadot does not draw from these medieval examples, but rather from the iconography developed in the printed haggadot of the early modern era. This is the case for the 1946 Haggadah from Cairo. Below are images of the first five plagues: blood, frogs, lice, ‘arov (wild beasts/swarms), and murrain.

Below are images from a haggadah issued for the first Passover after the end of World War II. It was published in a Displaced Persons Camp in Fernwald in 1946. The Haggadah’s wine stains show it was used for a Passover seder (below). The pages below illustrate the dependence of modern haggadot on premodern iconography. The bottom image, marked by wine stains, shows the section shefokh ha-matkha (“Pour forth thy wrath”) section of the Passover Haggadah, which must have been particularly meaningful in 1946.

The break away from that “traditional” imagery came only from the more artistic modern haggadot, such as the 1969 El Al Haggadah.

To see more –though not all– examples of Haggadot from the Fordham collection, see the catalogue of the exhibition “Haggadah and History,” which was on view in 2019. 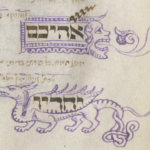 “Go forth and learn”: The Artist Joel ben Simeon and a Newly Discovered Hebrew Manuscript